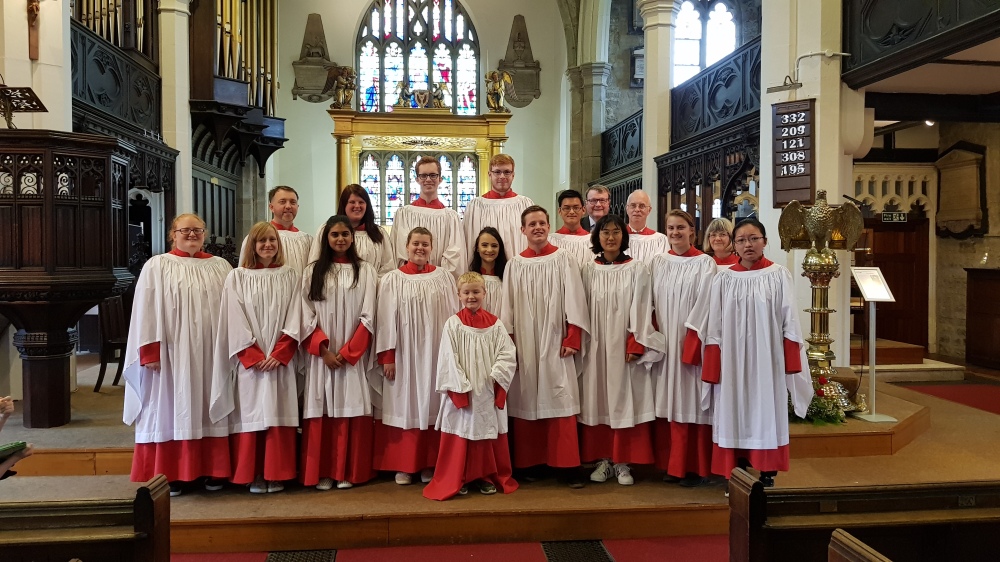 Music is very important in the worship of Huddersfield Parish Church. We are fortunate to have a team of talented people working together to provide music to enhance worship, lift the spirit and inspire the soul.

As well as our choir, which is predominantly focused on Anglican church music, music in church has also encompassed other liturgical traditions including pieces for solo instrument and solo voice. Currently the choir sings at each Sunday morning 10am Eucharist service and at Evensong on the second Sunday in the month. Repertoire for the choir stretches from the renaissance to the contemporary, and is selected to match the themes of each season and service.

The choir itself is made up of around 20 adult members, and has strong links to the music department at the University of Huddersfield. Rehearsals are held weekly on Friday evenings, and before each Sunday service. As well as singing in the parish church, the choir also undertakes concert engagements, and visits to other churches in the area and around the country. It is hoped to instigate some summer visits to sing at some UK cathedrals in the near future. The choir is also a very social organisation – members participate in a variety of parish functions and social activities, from the summer and Christmas fairs, to pig racing, BBQs and the occasional visit to the pub!

If you are interested in joining the choir please contact Richard Quarmby, Choral Director through the parish office, or speak to him after a Sunday service.

During the University term we have a fine choir including eight university students who receive paid bursaries.

As third year students will be leaving us in the summer, we anticipate we will have vacant bursary places in the next academic year. We welcome new singers to come and audition for our choir. If you are interested please contact Richard Quarmby, Choral Director via the parish office.

The church organ is a fine three manual instrument with 52 speaking stops originally installed by Conachers in 1908 but completly modified and rebuilt in 1983/4 by the local firm of Woods. The console is detached and situated on the south side of the church where it is easier for the organist to hear the sound and also to be in close contact with liturgical proceedings.

An extensive programme of maintenance and renovation of the organ was completed in Spring 2011.

Stephen was appointed in September 2002. He has previously held two appointments in the Manchester area and was Organist and Choirmaster at St. Matthew’s Rastrick from 1969-1979. An English graduate, he has been involved in musical activities throughout his life and taken a special interest in organ and piano playing and Anglican church music.

Richard Quarmby is the Choral Director at Huddersfield Parish Church. Born and brought up in the Lake District, he held his first organist position at the age of 11, and went on to hold organ scholarships at St Nicholas, Harpenden, Huddersfield Parish Church and Leeds Parish Church. After graduating from the University of Huddersfield, Richard was appointed Chapel Organist at St Edward’s School in Oxford, and then held a variety of teaching appointments in West Yorkshire. He has worked as an accompanist, recitalist and conductor for many choirs, and has played the organ at many of the UKs cathedrals and abroad, including performing at St Peter’s Basilica, Vatican City, Pisa and Florence Cathedrals, the Bridgewater Hall in Manchester and the Royal Albert Hall in London.

In addition to his work with Huddersfield Parish Church, he is also currently Musical Director of Huddersfield Voices and along with his wife Verity, a founding Director of Espressivo Chorus.