Welcome to day 4 of Pedalling for St.Peter’s (day 3 having been a rest day!), Julia Mercer’s blog about her 292 mile pilgrimage from Huddersfield Parish Church to Canterbury Cathedral. Julia’s aim is to raise funds to help in the repair of the ceiling at the Parish Church, as well as demonstrating sustainable travel via the use of the UK’s National Cycle Network. 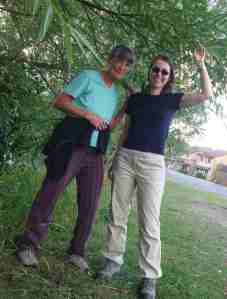 “Rainworth to Loughborough. 28 miles (33 when you get lost outside Nottingham!)

Am writing this on Tracey’s computer on Tuesday morning….too tired last night to do blog. Tracey is my lovely Loughborough lady, and lives South of the town almost on my route. She is an accountant and a traveller, and a Christian, part of a church in the town.

My Rainworth hosts saw me off on Monday morning with a special traveller’s prayer and I whizzed off down the tarmac railway cycle path. Lovely sunny day (daughter Kedi in Devon texted later in the morning to say she was having terrible weather) and it continued sunny and warm all day, just a bit of rain in Nottingham. But there was a troublesome head-wind which did not let up. Mostly I go so slowly that headwinds aren’t too much of a problem.

Neil was meeting me for lunch in Nottingham, so I had 18 miles to go in 3.5 hours, not really Tour de France speeds, but was still rather late as I lost the route somewhere north of Nottingham and back-tracked a few miles. I guess I could have got onto a direct route and just hammered into the city, but have a great fear of ending up stuck in the middle of a hideous spaghetti junction type place, cars hurtling by and no way out……. Anyway I found the route again, and found Neil, and we had a yummy lunch in a nice veggie café.

The earlier ride down to Nottingham suburbs was lovely. Little roads through the villages, sneaky short-cuts along bridle-ways, and a wonderful 3 mile stretch through Newstead Abbey grounds, where the gate-man waived the 50p charge I was supposed to pay, and gave me all sorts of useful directions for when I reached the far gate.

Great to see Neil. He brought supplies of cake and bananas, and a message from Sally and Graeme which was very heartening. (Thanks Sally & Graeme). Neil walked with me to the Clifton Bridge so he could get a look at the river Trent. Little cycle path along thundering highway…..scary. Not helped by some of the cycle route signs having been turned round. N. did his good deed for the day and turned one of them back.

Over the river we parted, and here too I parted from the Sustrans route, which wants to take you to Loughborough via Derby, thereby adding 30 miles. So I took the direct road, more like 10 miles, and it was fine though the road was bigger than it looked on the map, and not going on the cycle route meant slogging along against that headwind with no respite in leafy bridleways. But it meant I reached Loughborough in good time, a nice quiet human scale place after the juggernaut scale of Nottingham roads.

On to Market Harborough!”

Be sure to check back soon for Julia’s next instalment of her extraordinary journey.